- July 27, 2015
A little over a year and a half ago I learned my friends were moving to Vietnam to teach at an international school. Not only were they taking leave of their teaching jobs in sunny California, they were bringing their 3 children with them. This was my 'kick in the pants' moment. My friends studied in England at the same time that I had studied in Spain. I had always wanted to live abroad again. I had toyed with applying for a Fulbright exchange. I had even thought about teaching at an international school. I was just never able to follow through and make it happen. My friends pointed me in the right direction and a year later, I had signed up with Search Associates and begun my search for jobs.

It took me some time to put my application together, I had to write a statement, gather references, and pay their fee. Then began the waiting process. I started at the beginning of the recruitment cycle (August) and I didn't have a serious prospect until November. Each interview is just as much the school getting to know me as it is me getting to know the school. I interviewed via Skype for two positions. The first was not the right fit for me and the second decided to not fill the position this school year. That was a big disappointment.

In February I attended the job fair in San Francisco. I almost didn't go. Before the fair, I could see what schools would be attending and what positions they were looking to fill. I did not see any prospects that would fit. In the end, I decided that I would go and learn from the experience and be prepared to attend the job fair in Boston the following year (the Boston fair is considerably larger and has a greater attendance from schools in countries I wanted to work in).

The fair has a bizarre system that while seemingly out of date in this age of technology, it works quite well for everyone involved once you get used to it.  There is a candidate lounge where schools post chart paper with their school and their open positions.  There is a hallway with hanging file folders down each wall. One side for candidates and the other for schools. These serve as "mail boxes".  Candidates leave yellow slips of paper to request interviews of perspective schools and schools leave green slips for candidates to ask them to consider interviewing with them.   The day allowed for check-in, exploring the open positions, an introductory session explaining the process and how the weekend would proceed, a session on IB instruction and schools, and mini sessions conducted by the schools as a means for candidates to get to know them. That evening was the cattle call where all the schools would be present and candidates would vie for interview sessions from the schools.

I explored all the open positions for Educational Technology. There were 3 on my arrival: Cote d'Ivoire, Korea, and Trinidad and Tobago (later Egypt arrived with a position). I left messages for the schools and I was surprised to find a message waiting for me from Trinidad asking me to interview.

Before the first session I returned to my 'mail box' and had a message waiting from Cote d'Ivoire. I had a short face to face interview and we determined that Western Africa was not somewhere I would be comfortable.  I attended the sessions by the schools of Korea and Trinidad. And set-up interviews for that afternoon (this eliminated my need to attend the cattle call). My interview with Trinidad ended at 1:30 and by 2:30 I had been asked to a second interview at 5:30. They offered me a job at the second interview and gave me 24 hours to think it over and let them know.

I spent that evening and the next day talking to family and friends, but I knew I wanted to take the job. So as of August 13, 2015 I will be in Trinidad and Tobago working at the International School Port of Spain. #movedtotrinidad
#movedtotrinidad 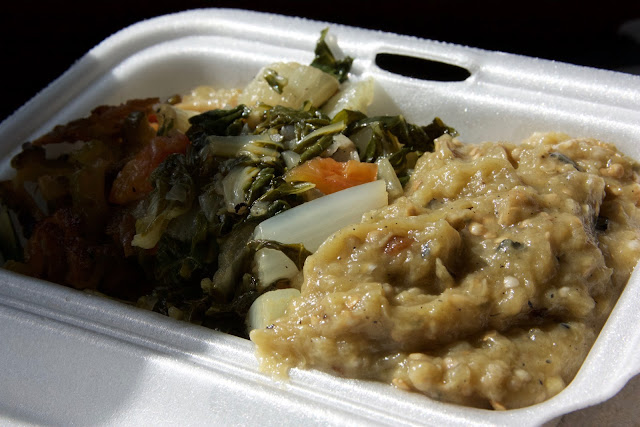 Jesse James is a local who runs a private taxi service called Members Only Maxi Taxi . Jesse has an outstanding reputation and is known by everyone in the expat community here in Trinidad. He is the one who picks us up from the Airport when we arrive for the first time. He also runs many tours. A group of us from school went on his Taste Trini Tour. All 9 of us met at the school at 7:30 am on a Saturday and the adventure began. We started in Port of Spain and made our way east to Mayaro. Here is a rough map of our trip. We stopped multiple times. Most times Jesse jumped out, bought the food, returned to the van and passed out portions. I sat in the co-pilots seat. It became my job to document what we were eating both by name and by picture. I also helped out cutting portions and passing the plate. By lunch we were so full. It was tough to contemplate eating the Roti.  The sites were amazing. It was so interesting to listen to Jesse tell us about Trinidad and the places we were passin
Read more

My first meeting at The Trinidad and Tobago Field Naturalists' Club and I won this prize. A pamphlet for International Migratory Bird Day. #Leightt